Is There a Better Location? 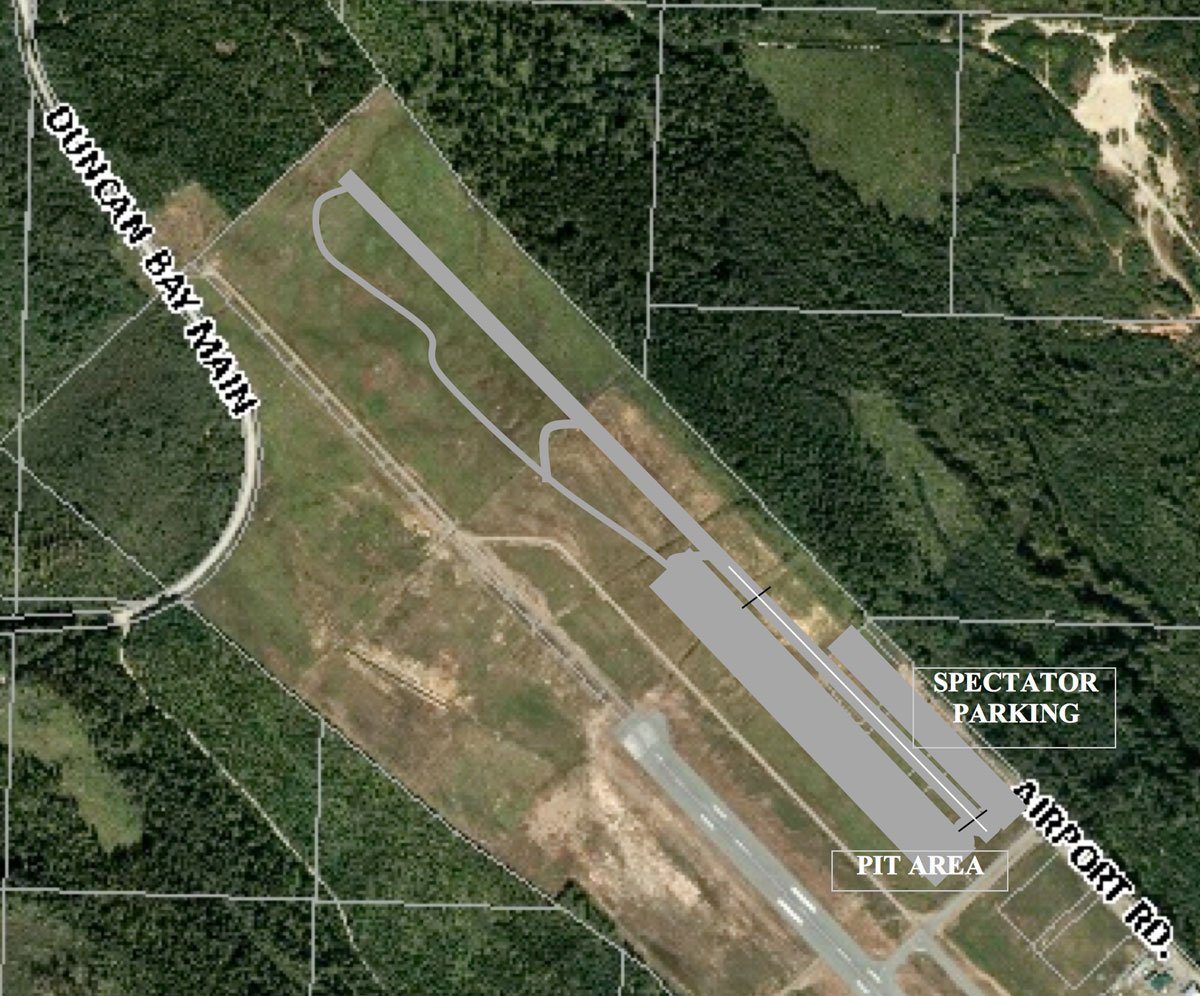 02 May Is There a Better Location?

Re: City to seek alternative location for drag strip

The City’s news release (see below) has stirred up a lot of negative feedback. Let’s take a positive approach because there is significant good in the news release.  The economic impact study shows the benefit to the City.  Vancouver Island MotorSports Association (VIMSA) is looking forward to continuing to work with the City to make this project a reality.  This is a good time to address the publics major concerns. 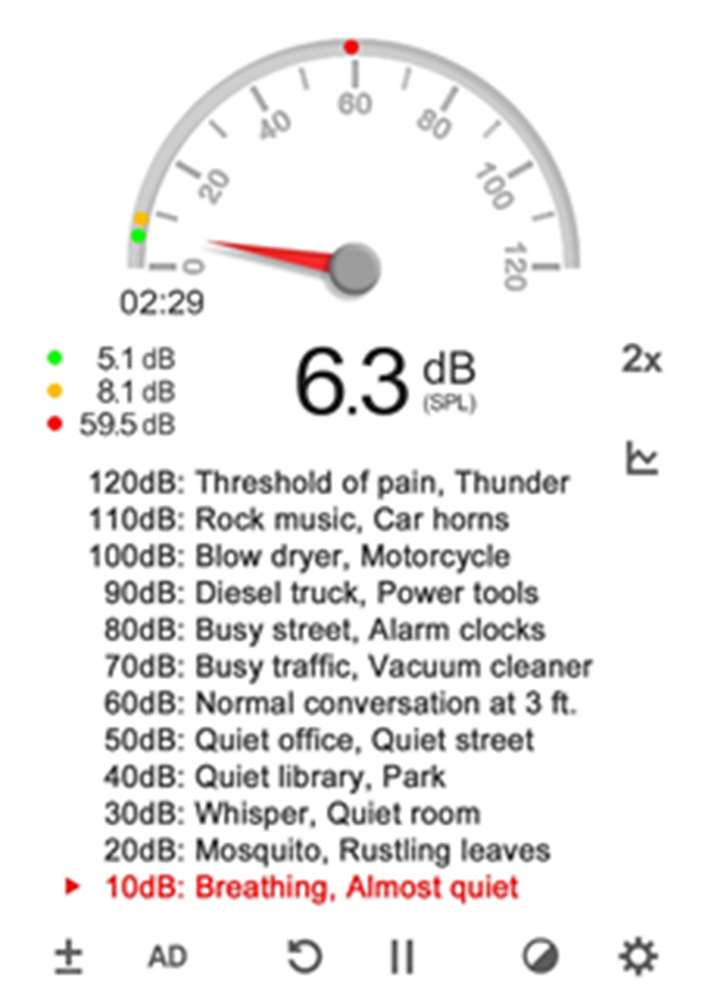 Sound was the first thing to be considered before proceeding.  The City & VIMSA shared the cost of the approximately $10,000 report. RWDI Consulting, a worldwide expert in understanding when sound becomes noise, conducted the assessment. The location of the sophisticated measuring devices was chosen to give a realistic result. Our objective was to identify the sound of the race car. We accomplished that, and they identified the race car at 50.2 decibels. For comparison, a minivan travelling 40 kph traveling down a residential road measures 55-60 decibels. (See the attached)

The actual proposed airport location has natural terrain that will reduce the sound transmission toward the residential areas.  As well, we are committed to building a sound berm and sound wall if necessary. We will not build in an area that creates a sound issue. Also, very few of the race cars will be as loud as the example used for the test, and many participants race their street car. Major events will take place three or four times a year. Be aware that all the land between the airport and the highway is zoned for industrial use.

VIMSA has never asked for any taxpayer money. We have only asked to partner with the City to build on their land. We are willing to invest $5,000,000 to improve a piece of unused previously cleared land providing items like roads, taxiways, paved parking areas and mowed grass areas. The Open House information said we could request that the road and fence be supplied. This facility will bring between $2.2 and $5 million to the local economy annually. All we have ever asked for is the use of the land. The land in question is not for sale, but available for lease (with no demand in the market).

We have engaged with the Homalco, We Wai Kai, and Wei Wai Kum First Nations. They have not indicated any opposition to the project and are interested in the economic opportunities it may bring.

When the Campbell River Airport Authority was formed as a condition to get some of the funding for the runway extension and terminal building revamp in 2011, the objective was to run the airport like a business.  In 2014, Tetra Tech EBA Inc., an industry leader in airport consulting, was commissioned to create an Airport Master Plan. http://crairport.ca/upload/pdf/Airport%20Master%20Plan%20-%20Sept%202016.pdf.

The Master Plan includes provisions for non-aviation uses including motor sport park. The words “for airport purposes” that appear in the 1966 land transfer documents were not taken into consideration for the City’s current Airport 1 Zoning “Permitted Uses”. The condition that is imposed is that the land is only for lease, not for sale. There is no need to have the land removed from the land grant as long the airport still exists. There are many examples of racing facilities at airports throughout BC and Canada.  Some are permanent like Fort St. John, and others are temporary like Thunder in the Valley was at the Port Alberni Airport, and Rumble on the Runway in Port McNeill.

Find A Need and Fill It

To sum up, “find a need and fill it” is said to be six words to success.  With a population of 750,000 on the Island, there is a need for a facility of this type.  Currently Port McNeill closes their airport for three weekends a year to allow drag racing events.  Port Alberni holds their annual “Thunder in the Valley” event on a downtown street.  These events are well attended by participants and spectators.  We could have the only permanent facility on the Island.  Demographics of the typical participant and spectator show the very type of people that would love what Campbell River has to offer. My concern with looking for another location is that it will take the project to another municipality, leaving people to say once again “Campbell River missed another opportunity”.

We strongly feel that “sober second thought” be given to this project. In the history of the initial building of the Campbell River Airport it is said that “imagination and the local “can do” spirit won out”.   Let’s show that we are willing to “live and let live” and enjoy the benefits of this attraction.

VIMSA was incorporated under the BC Societies Act on January 13, 2016 as a not for profit organization. Our purpose is to organize motorsports-oriented individuals to promote the development of a facility on Vancouver Island that is comprised of a dragstrip as well as facilities that complement a multi-use aspect for automobile mobility and tourism and motor sport.

See the City of Campbell River News Release below: 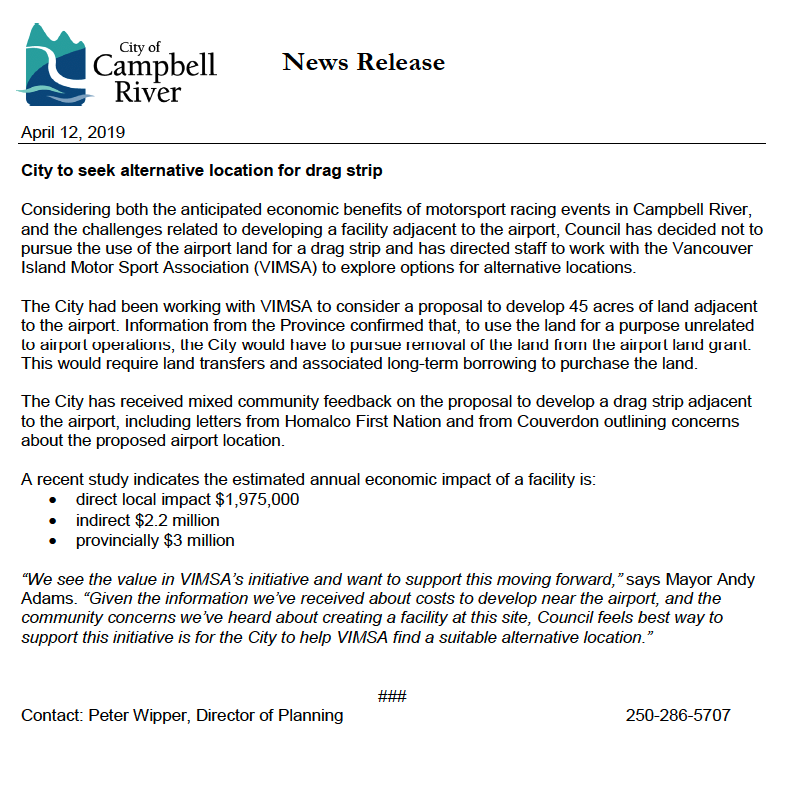